Way back in 2011, I made it to Birmingham, Alabama, hoping to see an Atlanta Braves game at Turner Field. Back then, I wasn’t aware of how amazing Minor League Baseball was, and when my Grandparents said we couldn’t make the three hour drive, we settled on my first MiLB game ever- at the old Regions Park:

Regions Park lies in the suburbs of Birmingham, in a town called Hoover. This game started a tradition- I visit Birmingham every year for the Fourth of July and the Barons. The following year, the Barons announced their move to a new, modern downtown facility called “Regions Field.” My last game at Regions Park was on 7/3/2012, and this year, with the name changed to “Hoover Metropolitan Stadium” and the Barons gone, I made my way to a new ballpark:

The little kid on the bottom right would be my cousin, Gavin. This was the first view I got of Regions Field. I went to get my ticket print-out exchanged for a ticket stub, and Minor League baseball continues to amaze me:

There is a ticket stub on top (sorry about the blurriness). When I went to Tropicana Field, the ticket office didn’t even know what a ticket stub was. A Double-A baseball team can put a bit of information into a computer and print out a ticket stub (I don’t know what it is about those, but they are cool). On the bottom, there are two pocket schedules. I think the Barons should have put something about Regions Field on the front, but they still look great. 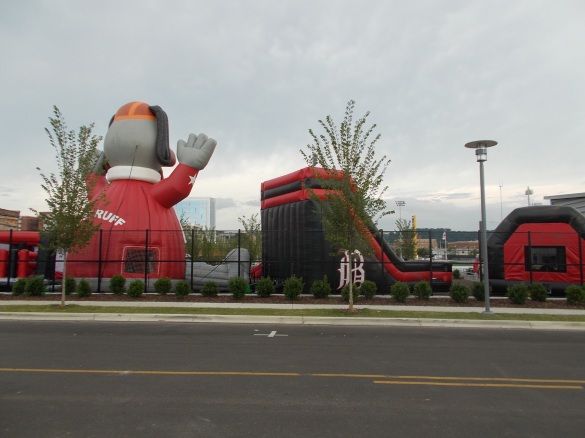 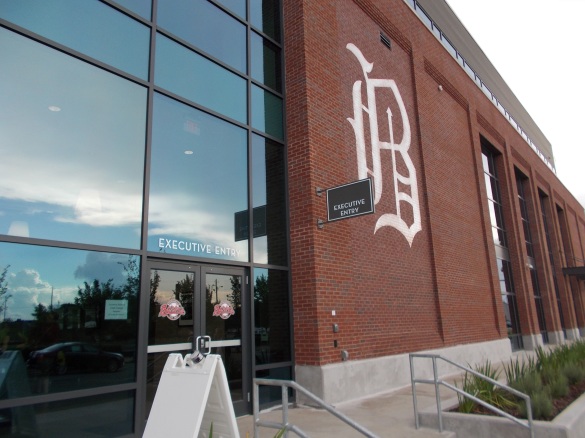 These photos were all taken down the third base line. As you can see, the Baron’s logo is painted on the brick:

There is a 3rd base entry closer to the Kid’s play place:

I went to the Home Plate Entrance, which is next to the ticket office:

I didn’t actually walk down there, but I crossed the street for a quick picture of the outside of Regions Field:

If you’ve noticed, I have been getting autographs on crappy Official League baseballs instead of Major League Balls. I had one left, so I decided to head over to the Barons Team Store to get a logo ball:

I was actually in a rush. We got there about 5 minutes after the gates opened, and getting the ticket added about 5 minutes. I ran inside to get my baseball:

The team shop had everything from shirts to caps to pennants. I would go back in there for more stuff, as you will see later.

I went down to the Barons dugout to try and get a practice ball- and I got two as the players walked in:

I gave one of them to my cousin, and we went to get some food: 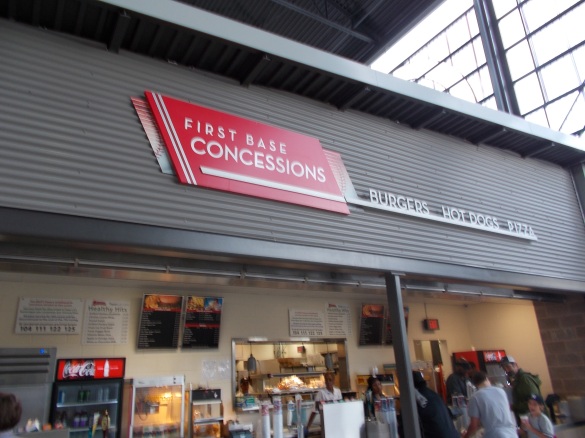 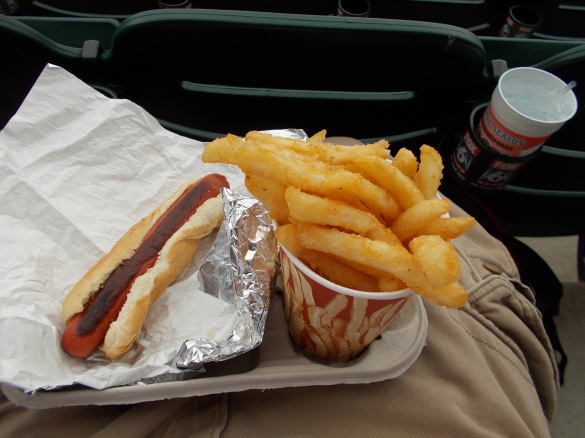 When I went to Regions Park back in 2011, I got a mystery meat hamburger. The hot dog that I got at this game tasted great, and the fries were amazing. It was much better than the food I had at the last stadium.

Soon after eating, Britt Burns and the starting pitcher came out to warm up. Gavin and I got Burns to sign (or those of you who don’t know, he is the Barons pitching coach). I didn’t take a lot of player photo’s because of my crappy camera and the low light, but I have a few. Therefore, there is no photo of Britt Burns.

Gavin and I walked over to the dugout to get more autographs, and several players came over to sign. Trayce Thompson gave me my 100th autograph of the year:

I took that picture of him instead of getting a picture with him because there were several other players signing to my left. Babe Ruff, the Barons mascot, came by in a car:

Then, he came back to sign a couple of autographs and take a picture with my cousin: 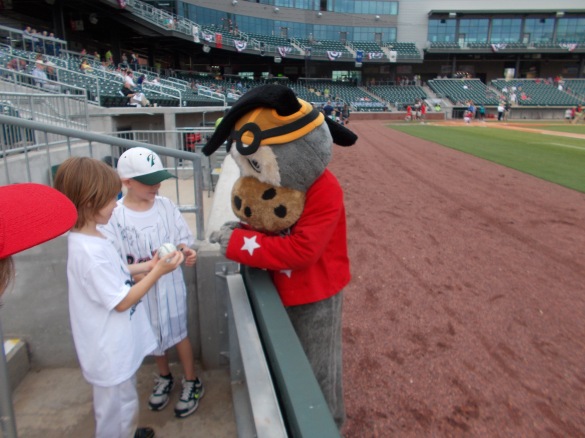 Jared Mitchell was the one of the last Barons to sign, and as the other players were walking in, I snapped this picture of him: 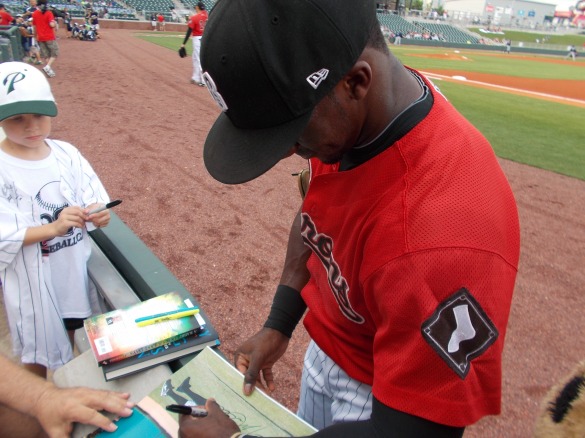 The game started, and I pretty much stayed in my seat for the majority of the game to visit with my Grandparents. I walked around the stadium to take some photos: 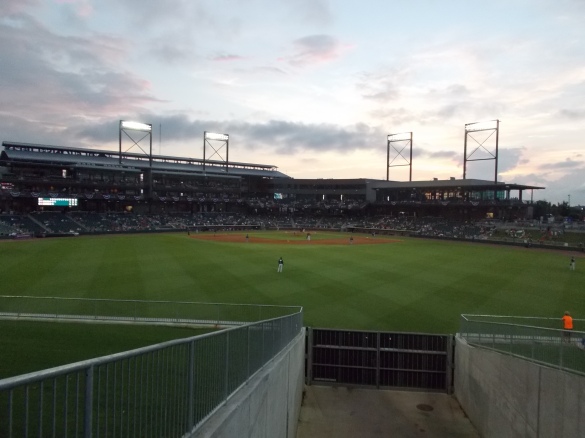 This is the view from center field. As you can see, there is a scoreboard on the left side of the picture for any fans in the outfield.

This is the view from the kid’s play area, which is actually called the “Brighthouse Family Fun Park”, located down the third base line: 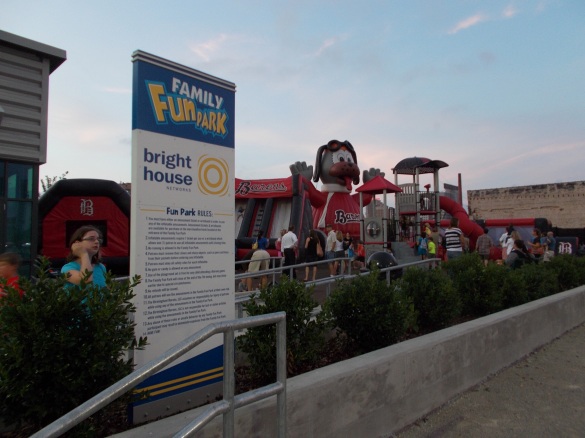 There is also a small, replica baseball diamond in center field: 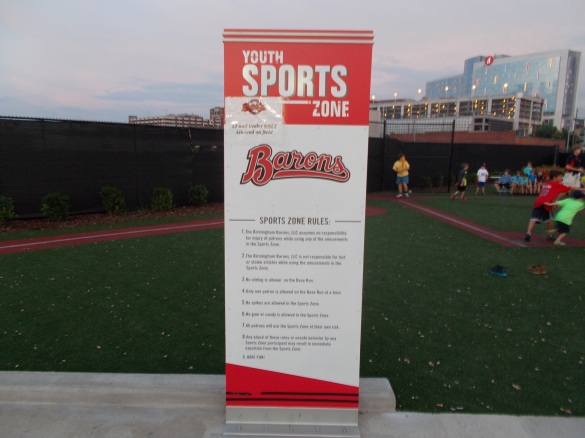 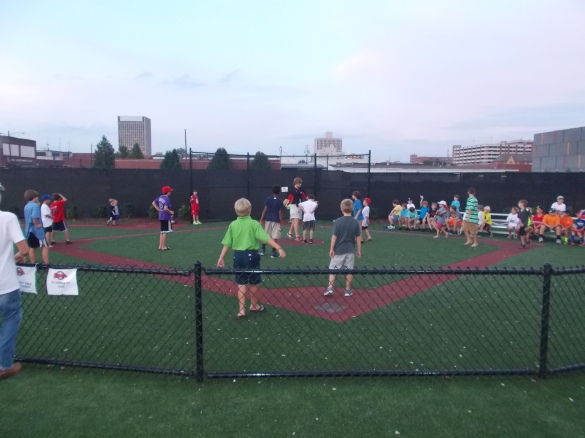 Here is the view from behind home plate:

The tall white, glass building to the right is Birmingham’s Children’s Hospital. Here is another look at it: 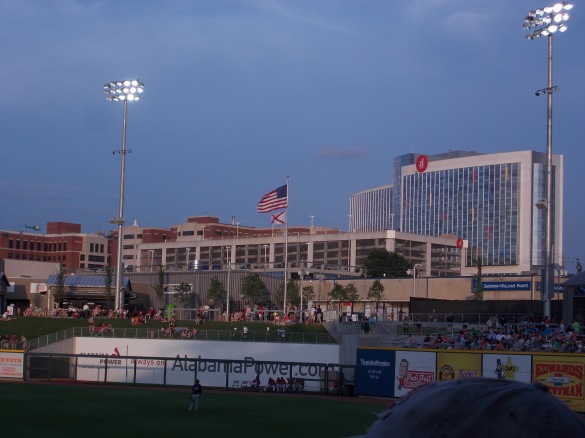 Here are some shots of Regions Field’s scoreboard: 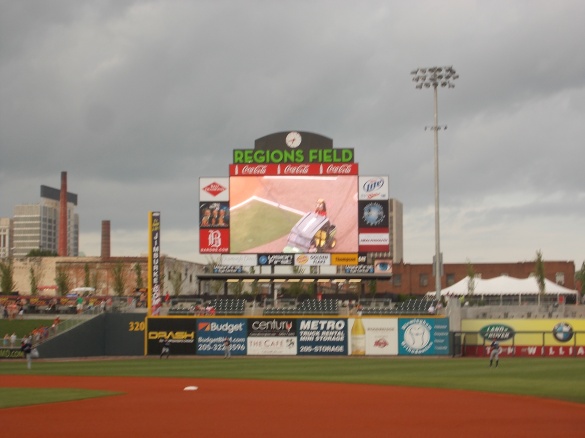 You can also walk behind it:

Here are some sunset photos:

There are some batting cages in right field:

The Barons would go on to win the game by a final of 6-4, and after the game, I went to the Barons dugout to try and get the line-up card from Julio Vinas, the manager. He said that he kept it for managerial purposes, so I didn’t get it. Then, a kid next to me got a broken bat, and I came very close to getting one myself. I asked a player for one, and he was going to hand it to me before he took it back to the locker room. Vinas was signing autographs, but my Grandfather likes to go to bed at 8:00, and as you can imagine, he was tired (it was around 10:00 and we had a 1/2 hour drive). I decided to skip Vinas’s autograph and leave. Here are my autographs:

From top to bottom: 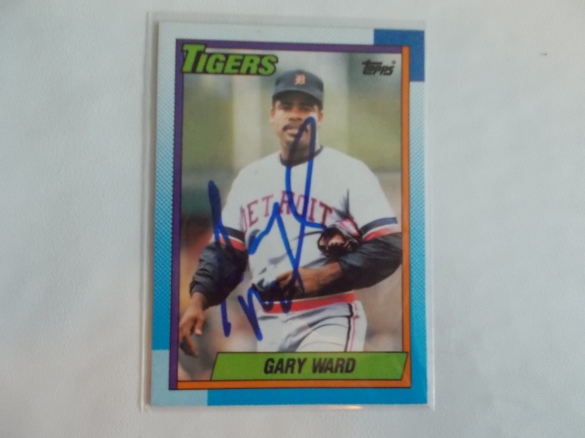 The two balls that I kept were not photographed, and because this is going up so late, I’m not going to add it. The other two went to my cousin, and one of them was  game-used foul ball that hit someone’s camera (the camera man was in the dugout). The other ball that I kept was a 3rd out ball, and when I caught it, these kids who were behind my seats were saying, “Here, Here, Throw it here!” I had already given away one ball, and these kids were yelling in my ears and kicking my seat, so there was no way they were getting the ball.

Here are the souvenir cups I got:

I also got this Ice-Cream helmet:

That was about it. Thanks to all of the players for the baseballs/autographs, and thanks for reading!

I went to Montgomery the following day, so expect a post up soon with pictures of Riverwalk Stadium. I didn’t go to a game, but I tried to take as many pictures as possible in a 15-20 minute time frame (my Grandmother goes down there once a month for meetings, and we needed to get lunch).

On July 3rd, I made what would be my last trip to Regions Park. The Birmingham Barons would be moving into a brand new, downtown ballpark called “Regions Field” for the 2013 season after spending 25 seasons at this old ballpark. My grandparents would be taking me, and we got to the ballpark around 30-45 minutes before the start of the game. We printed our tickets at home, so I didn’t have to wait in line. Before getting autographs, I walked around a bit taking some pictures: 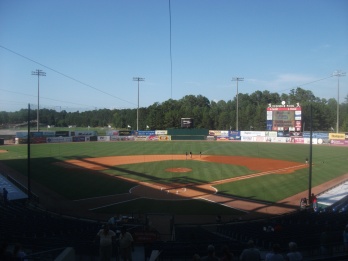 I went over to the Barons side to get some autographs, and I ended up with 9. There was literally no competition, so it was easy. Jared Mitchell was telling my cousin, Gavin, “If I don’t get a hit tonight, you are going to take care of me, alright?” He, unfortunately, ended up going 0-4 with 4 K’s. And we weren’t able to take care of him. I always like it when players interact with their fans.

The Barons would be playing the Huntsville Stars, which was a match-up I saw last year at the same ballpark. In the previous game, the Stars won, 2-1. Neither team scored until the 9th, and we had to leave early to beat the traffic. Back to the game- Here are some pictures of the ballpark: 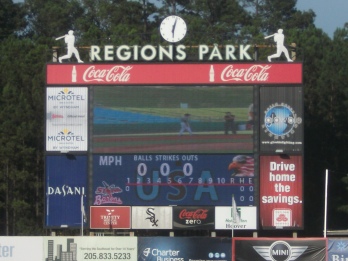 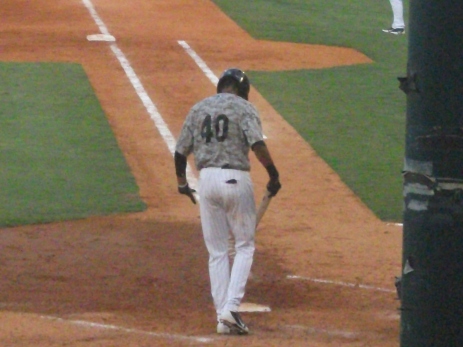 The Barons would win, 5-1, and almost had a shutout, as the Stars didn’t score until the 9th. That night was a 4th of July celebration night, but unfortunately, I don’t have any pictures right now. We actually stayed for the fireworks. Thanks for reading!

Beyond the Outfield Fence

I’m Nick Badders and I am a 15 years old living in the Bay Area. I’m an A’s Season Ticket Holder in the RF Bleachers and ballhawk at A’s, Ports, Nuts, and Giants games. Here, I write about my experiences going to and snagging balls at Minor League Baseball games.

Traveling & writing about the Midwest League, past & present, since 2011

A big fan of the game of baseball itself, who just happens to have no favorite team.

The rants, raves, tears, and joys of a baseball fan named Dave.

Adventures and Opinions of a College and Minor League Baseball Fanatic

The Greatest Minor League Baseball Blog of All Time

Todd, Tim and Kellan Cook love Baseball, the Seattle Mariners and trekking around the country to visit stadiums and watch games. These are their stories. #FatherSonBaseball

My name is Cole, and I am a huge baseball fan from Milwaukee. I have been into baseball since the age of three. I play for four teams and go to as many Brewers games as possible. On this blog I am going to interview players, and write about my experiences at the ballpark, from a Little Leaguers perspective. If you like my blog, click the gray follow button, on the lower right side of the screen to be notified when I post a new blog, article or interview. I hope you enjoy!!

Collecting every topps set since the year I was born

Walking with a Swagerty

Ballparks on a Budget
7000 Coliseum Way

I grew up a Yankee fan, I favor Pitchers whenever possible, I am a stathead, and my dream job is to be a GM for an MLB franchise. In the summer, I go to MLB games and catch baseballs. In the winter, I write about what teams are doing to get better or worse. I try to be positive and unbiased in my writing, but that isn't always possible when evaluating teams truthfully.

My name is Zack Hample, and I've snagged more than 11,000 baseballs in the stands at MLB stadiums. I don't blog (much) anymore, but there are hundreds of *amazing* entries here in the archives, so comb through those and make sure to find me on YouTube. That's where the action is now.

Welcome to my blog. My name is Joshua McNeil, and I am a huge baseball fan from South Florida. Follow my blog to hear about my autograph collection and adventures throughout the Majors and Minors.