I apologize for the delay! School work has taken up a lot of my time! Anyways, I have a couple of TTM things to blog about- the first coming from the Delmarva Shorebirds: 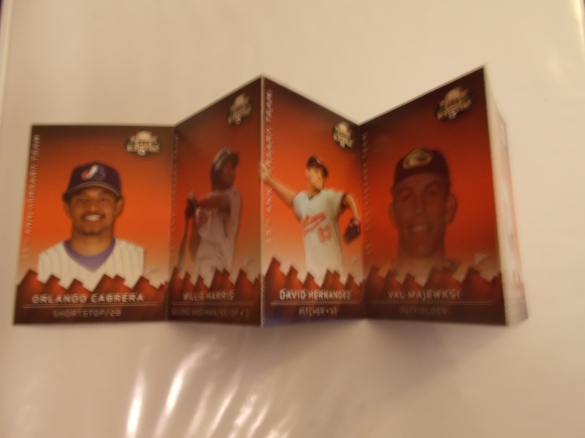 (Sorry about the poor quality)

The Shorebirds always send me a lot of pocket schedules- the sent me 21 at one point! Thanks to the Shorebirds!

The next item comes from perhaps the best TTM signer in the game- Pat Neshek:

Pat is one of my favorite players, probably because he is so good to his fans. He will take the time to sign 20 cards if you send him that many, and, a couple of times, he actually sent me some baseball cards (7, to be exact)! Thanks to Mr. Neshek!

I will have at least two more posts up in 2013- a season recap (which, I know, I said I would write last month) and some goals for 2014. Other posts could include some baseball card pack breaks and other mail items. Thanks for reading!

Beyond the Outfield Fence

I’m Nick Badders and I am a 15 years old living in the Bay Area. I’m an A’s Season Ticket Holder in the RF Bleachers and ballhawk at A’s, Ports, Nuts, and Giants games. Here, I write about my experiences going to and snagging balls at Minor League Baseball games.

Traveling & writing about the Midwest League, past & present, since 2011

A big fan of the game of baseball itself, who just happens to have no favorite team.

The rants, raves, tears, and joys of a baseball fan named Dave.

Adventures and Opinions of a College and Minor League Baseball Fanatic

The Greatest Minor League Baseball Blog of All Time

Todd, Tim and Kellan Cook love Baseball, the Seattle Mariners and trekking around the country to visit stadiums and watch games. These are their stories. #FatherSonBaseball

My name is Cole, and I am a huge baseball fan from Milwaukee. I have been into baseball since the age of three. I play for four teams and go to as many Brewers games as possible. On this blog I am going to interview players, and write about my experiences at the ballpark, from a Little Leaguers perspective. If you like my blog, click the gray follow button, on the lower right side of the screen to be notified when I post a new blog, article or interview. I hope you enjoy!!

Collecting every topps set since the year I was born

Walking with a Swagerty

Ballparks on a Budget
7000 Coliseum Way

I grew up a Yankee fan, I favor Pitchers whenever possible, I am a stathead, and my dream job is to be a GM for an MLB franchise. In the summer, I go to MLB games and catch baseballs. In the winter, I write about what teams are doing to get better or worse. I try to be positive and unbiased in my writing, but that isn't always possible when evaluating teams truthfully.

My name is Zack Hample, and I've snagged more than 11,000 baseballs in the stands at MLB stadiums. I don't blog (much) anymore, but there are hundreds of *amazing* entries here in the archives, so comb through those and make sure to find me on YouTube. That's where the action is now.

Welcome to my blog. My name is Joshua McNeil, and I am a huge baseball fan from South Florida. Follow my blog to hear about my autograph collection and adventures throughout the Majors and Minors.